Why we all love minorities (and want to be one)

Who wants to belong to a minority? Who wants to feel left out or marginalized, merely because you are different from the mainstream, or because your hold unpopular views? Who would want to wage a lonely battle against a crushing orthodoxy?
Actually, it turns out that a lot of people would. Many of us cherish and celebrate minorities, and would want to be part of a minority themselves. We sympathize with heroic dissenters and outcasts, with the downtrodden and oppressed, the small voice drowned out by the majority. Why is this so?
Contrarian heroism
One reason is that, in our day and age, we pride ourselves on independence of mind. We loath conformism, herd mentality and stifling orthodoxies. We revel in the heroism of the maverick who dares to challenge what everybody else thinks. Who wants to be a champion of the orthodoxy, after all? How docile to think what the majority thinks! How gullible to swallow what they want you to believe! We would rather be the small and courageous David than the giant Goliath.
By and large, we are right to celebrate independence of mind, and to be suspicious of consensus. But  heroism of the contrarian streak of mind can take on ridiculous forms. A view that is shared by a majority becomes almost by definition suspect. Wherever the contrarian sees a mainstream, he desperately wants to paddle in the other direction, boat firmly against the current. It’s every contrarian’s nightmare: to become mainstream, or at least to be perceived as such! So the contrarian seeks his own self-fulfilling prophecy. If you want to be part of a minority, here’s how you marginalize yourself. Just keep saying things that are sufficiently outrageous or absurd, and eventually you will end up on the fringe. 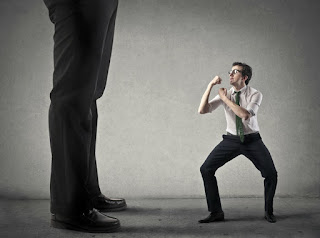 Think about 9/11 Truthers, who desperately want to challenge the ‘official’ view, and end up believing in fatuous conspiracy theories. They regard themselves as heroic dissenters from the orthodoxy, but theirs is a self-inflicted martyrdom.
Oppressive minorities
The second reason why our culture love minorities is our deep-seated sympathy for the underdog. Playing the victim card pays off. If you can persuade people that you are being silenced and oppressed, you even earn extra moral credit in some quarters. Being part of a minority has become attractive and enviable. This is why many people pretend to be in a minority even when they’re not. Here’s how it works. No matter how many supporters your cause has, no matter large your audience is, always insist that you are still the embattled minority, silenced by an evil orthodoxy. Never accept that you might get the upper hand, or your views might get recognition. Make your enemy bigger, belittle yourself.
But there is nothing praiseworthy about being in a minority position. Minorities can be dead wrong, or hold repulsive views, or even be dangerous. For instance, one of the major threats to free speech today is coming from a certain religious minority. Everyone knows that mockery and criticism of Islam, and the prophet Mohammed in particular, is bound to be promptly met by violence from Islamic fundamentalists. Deluded apologists make excuses for Islamic radicalism, and one of the main reasons why they do so is that the violence is committed by what they perceive as an oppressed minority. Poor young frustrated youngsters, whose faith is being relentlessly ridiculed by the powers that be, resort to the only means of resistance that is available to them: guerilla warfare. How endearing!
But there is nothing redeeming or noble about being small in numbers. If you succeed in enforcing your medieval blasphemy laws on the rest of society, you are not an oppressed minority, but an oppressive minority.
Political correctness
Finally I want to make a cautionary point about the notion of political correctness. Just as the high priests of political correctness exaggerate how oppressed and marginalized some minorities are in the political arena, we should not exaggerate the dominance of political correctness either. Don’t fall into that trap. True, the rise of offense culture on liberal university campuses is a real phenomenon, and it is something to worry about. But let us not make the boogeyman of political correctness larger than life, or play the victim card ourselves. In its more ludicrous forms, offense culture is still a fringe phenomenon, which received a strong pushback in the media and elsewhere. These people have not, by any reasonable measure, succeeded in enforcing their puritanical views on the rest of society.
Indeed, part of the backlash against political correctness consist of proud offenders who expressly try to outdo each other in political incorrectness, to say and write things that are intended to shock cultural sensibilities as much as possible. By the very fact that they can get away with this, however, we can see that the influence of political correctness is rather limited. Indeed, political correctness is in large part a matter of the Regressive Left eating its own children. The climate may be suffocating on liberal campuses, but in the rest of society, few people care.
If political correctness has any effect on the right side of the spectrum, it is a counterproductive one, realizing the opposite of what is intended. In no small measure, the popularity of Donald Trump can be seen against the backdrop of this excesses of political correctness.

Free thought is under threat today, but the danger is not coming from the upholders of political correctness, or at least not directly. At most, the role of the politically correct crowd is that of useful idiots, abettors and facilitators of the threat rather than the threat itself. That’s bad enough already.
[Speech at the Battle of Ideas festival in Amsterdam]
vorigeHomeopathie is veilig, het geloof erin gevaarlijk
volgendeWaarom de meerderheid dol is op minderheden